Blueprint for a Co-operative Decade - February 2013 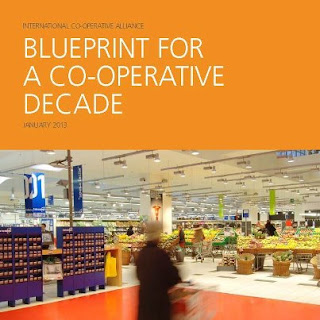 This document was considered in draft by the General Assembly of the International Co-operative Alliance (ICA) in Manchester in October 2012. Following comment and discussion (now reflected in this revised version) the Blueprint was approved by the General Assembly. It is now issued in its final form. French and Spanish versions will be available shortly.
The intention of the General Assembly is that the United Nations International Year of Co-operatives marks the beginning of a worldwide campaign to take the co-operative way of doing business to a new level. The ambitious plan in this Blueprint - the “2020 vision” - is for the co-operative form of business by 2020 to become:

• The acknowledged leader in economic, social and environmental sustainability
• The model preferred by people
• The fastest growing form of enterprise

The 2020 vision seeks to build on the achievements of the International Year of Co-operatives and the resilience demonstrated by the co-operative movement since the great financial collapse. By pursuing the strategy outlined in this Blueprint, we aim to make 2011-2020 a Co-operative Decade of confident growth.

These are significant achievements, but they need to be seen in the context of the dominant emerging trends that are likely to shape our politics, societies and economies for the foreseeable future. Some of the most crucial global trends are:

Co-operatives already make a significant contribution towards alleviating these pressing global problems. But, with appropriate support and greater understanding and recognition, they could contribute much more. The challenge now is for the ICA, national bodies, sector groups, co-operative societies and individual members to take this Blueprint forward into implementation.