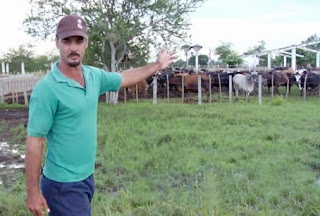 Yudiel Mojena Guerra, a young farmer from eastern Cuba, was given land from the government as part of a strategy to increase domestic food production. So he started working at a run-down dairy farm, refurbished it, and bought some livestock.

But like most workers in the non-state sector, he soon found out he needed not only start-up capital to introduce new technology, but also technical and management capabilities for efficient production.

To support farmers like Mojena, and to contribute to Cuba’s ambition to rely on domestic food production and increase food security, UNDP and the European Union developed a joint partnership with the Cuban Ministry of Agriculture.

Mojena is one of the 13,200 new farmers under this initiative, called PALMA (Programa de Apoyo Local a la Modernización del sector Agropecuario en Cuba). Since its start in 2009, the program has supported the modernization of local agriculture in 37 pilot municipalities in Cuba.

“It has helped me a lot, mostly in terms of knowledge acquisition and training,” Mojena says.

PALMA has provided farming tools and machines to farmers and cooperatives, and trained them on modern and sustainable farming, including training on cooperatives; and business management and planning.

These actions have helped enhance technical and economic management skills, develop a cooperative culture in over 4,000 members, and further introduce related tools like strategic and participatory planning at around 300 collectives.

For his part, Mojena has not only increased production on his farm through his training, he has also been able to help others.

“Local producers come here to build on my little experience, and I visit them to exchange good practices,” Mojena says. “The idea is to move forward.”

Mojena says he already has 105 heads of cattle, including 30 milking cows, sheep and goats.

“My plan is to continue expanding so that I can increase milk and beef production for local consumption and industry, and make more profits for me and my cooperative,” he says.

PALMA relies on the bottom-up methodology that takes into account the needs and experiences of the local producer, as witnessd by Osmany Castro Luna, a farmer from the province of Sancti Spiritus.

“The farmers are really those who know what you need in the rural areas, if you want to increase the output of crop- and cattle farming,” he says. “That is what this country badly needs for it to be able to substitute for food imports.”

- Cuba imports a large portion of its food – 80 percent in 2009 – and a new program is helping local farmers increase domestic production.
- More than 13,200 new farmers (14 percent women) and 366 cooperatives (6 percent of total) in different parts of Cuba have received agricultural equipment and training through this program.
- The cooperatives have been able to increase production of basic food products, such as milk, grains, fruits and tubers. In 2011 alone, this increased production replaced more than US $15 million worth of food imports.