We are about to enter the last month of the International Year of Co-operatives. While we will surely ride the momentum through the end of calendar year 2012, the International Year actually launched on 31 October 2011, at a plenary session of the United Nations in New York, and so officially closes, for co-operators, when we meet together in Manchester, UK on 31 October 2012.

Co-operators are doing something with ‘our Year’ that others haven’t done with theirs. We are attempting to leverage it from a Year into a Decade. October is the month when we determine whether we will be successful in that. The International Co-operative Alliance has been consulting this entire year with leading co-operative organisations in 100 countries to develop a Blueprint for a Co-operative Decade. At the end of September, the draft Blueprint will be released. On 31 October, ICA members will decide at a General Assembly in Manchester whether this is the right way forward.

Before meeting in Manchester however for what will be an exciting week of activities and events known as Co-operatives United, co-operators will be meeting in Quebec City, Canada for the International Summit of Co-operatives. The Summit runs from 6-8 October, but is preceded by an innovative economics conference, also in Quebec City, called Imagine 2012. I will be blogging from the Summit and so will not say much more about it now, other than that it bookends at the start of October with Co-operatives United at the end, to ensure that the International Year of Co-operatives builds to a crescendo.

If we are successful with this final month, we will simply be revving up before we shift to the next gear and turn the 2011 preparatory year and the 2012 implementation year into the promising start of the Co-operative Decade. The time horizon for that decade is 2020 when we believe, if we are successful in legitimately positioning the co-operative as the acknowledged leader in economic, social and environmental sustainability, that it will become the model preferred by people, and consequently the fastest-growing form of enterprise in the world.

Find out how Co-operative Enterprises Build a Better World in a series of free eBooks that show how co-operatives provide an ethical alternative for business across the world.

To celebrate the International Day of Co-operatives (July 7, 2012), the first eBook tackles food security and how the sector from smallholder farmers through to multi-billion dollar organisations is working to provide key commodities for the global population.

Food co-ops make a big difference in US communities


A recent study conducted by the National Cooperative Grocers Association in the US shows how food co-ops make a difference in their local communities. The report, “Healthy foods, Healthy communities,” looks at the social and economic impact of food co-ops in the US.

The study highlights how co-ops are superior to the conventional grocery industry — those stores that are privately or investor-owned — in terms of the proportion of energy efficiency, environmental impact, healthy and environmental food provided and the job opportunities offered.

For every USD1,000 a shopper spends at their local food co-op, USD1,604 in economic activity is generated in their local economy — USD239 more than if they had spent that same USD1,000 at a conventional grocer in the same community.

Retail food co-operatives also create jobs for the local communities. The average food co-op creates 9.3 jobs for every million dollars in sales. A typical co-op creates USD10 million a year in revenue and provides employment for over 90 workers, or nine workers per million. In contrast, a conventional grocer creates only 5.8 jobs per million dollars in sales.

Overall, co-ops generally pay comparable wages to their competitors. For some occupations such as cashiers, stock clerks or food prep workers, the average hourly wage is higher for co-op workers than for employees within the conventional sector. Due to various bonuses and profit sharing, co-op employees earn an average of USD14.31 per hour compared to USD13.35 for their peers in the traditional sector.

Furthermore, 68% are eligible for health insurance in the co-op sector, where as less than half are eligible in the conventional sector, due to the fact that there are more part-time employees than in this sector. Employees also highly value the co-op principles and appreciate their workplace culture and the benefits.

A food co-op in the US spends an estimated 38% of revenues locally, while a conventional grocer spends 24%. Food co-ops also help to redistribute the revenue to the local economy.

A co-op with USD10 million in annual sales generates USD16 million of local economic impact. On the other hand, a local conventional grocery store of the same size, in the same community, would have an annual economic impact of USD13.6 million. This means that by choosing to support and shop at a food co-op, a community can increase its total economic activity by over USD2.4 million a year.

The study shows that co-ops also have more efficient environmental policies because consumers themselves are involved in the decision making process.

A typical NCGA food co-op recycles 96% of its cardboard waste, 81% of its plastics and 96% cardboard, as opposed to 36%, 29% and 91% in the conventional sector. Food co-ops are also involved in energy conservation projects. Co-op food stores have scored an average energy score of 82 out of 100, while conventional grocery stores have only scored only 50.

• The National Cooperative Grocers Association (NCGA) is a business services co-operative for retail food co-ops located throughout the United States. For more information on the study, visit: strongertogether.coop/food-coops/food-co-op-impact-study 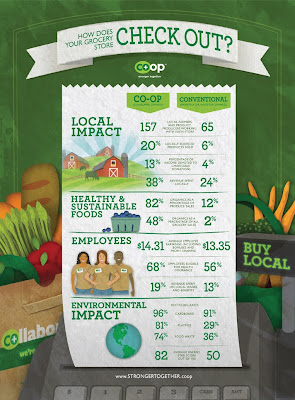